On June 5–6, the HSE Institute of Education welcomed a seminar by the International Academic Consortium working as part of the Key Competencies and New Literacy project, a joint initiative between IOE and Sberbank’s Investment in Future foundation.

The first half of 2017 has been a vibrant and eventful period for the HSE Institute of Education marking the launch of several large-scale and far-reaching academic endeavors. These include the Sberbank-sponsored Key Competencies and New Literacy international project, which aims to design best-practice roadmaps for implementing the 21st century skills agenda in Russia, with a special focus placed on school-age learning environments as the key settings shaping the next-generation talent’s intrinsic values, attitudes and abilities.

At the Project’s kickoff in late February, IOE hosted a series of scoping and foresight discussions where representatives of the academic and business communities were collaborating to better align their Project visions and to map out the overall framework & delivery approach.

As the endeavor is now entering its principal research phase, on June 5–6, IOE welcomed a seminar by the Project’s International Academic Consortium, a dynamic venue to take insights into the global framework of key 21st century competencies & literacies, to analyze their implications for Russia, and to outline approaches to school curriculum upgrades drawing on evidence from comprehensive country-case comparisons.

In a globalized world of accelerating digital move and transdisciplinary innovation, nations have seen drastic changes in their economic and social landscapes. With major redistributions in sectorial economic powers and resulting transformations in the labor market, concerns over securing a steady supply of 21st century-proof talent have become part and parcel of socioeconomic sustainability & growth agendas, including policy, industry, and education.

As today’s international discourse on 21st century skills has had a good deal of ambiguity with respect to the most fundamental concepts and definitions, the Consortium team primarily aimed to bring more clarity and consistency to the underlying terminological framework, including through making generic conclusions from country cases the participants were presenting.

As a result, ‘competencies’ were classified as a range of pragmatic capacities enabling one to best achieve specific life goals. In particular, the following competency groups were singled out: 1) cognitive (e.g., critical thinking, creativity); 2) social and emotional (e.g., cooperativeness, communication skills); and 3) those attributable to self-regulation (e.g., planning, adaptiveness, self-directed learning, etc.).

In the course of the seminar, the Consortium team also analyzed various approaches to designing and delivering the 21st century skills syllabus, with particular consideration given to the Canadian and Finnish models, where specialized modules are factored into the curriculum, and the extracurricular-based South Korean model. 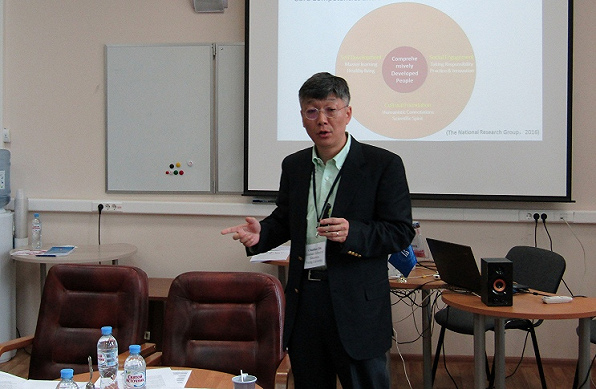 Looking ahead, outcomes from the seminar discussions will form important groundwork to draw upon in making next Project steps as part of a large-scale comparative study the Consortium is about to commence. At this stage, further cross-country insights into best-practice examples and shortcomings in local schooling upgrades will be taken to allow more representative conclusions both at the international level and with respect to national scenarios.

The key deliverable for this phase, a two-volume report on the subject, is slated to come off the press in summer 2018. The document will render a comprehensive perspective on such areas as the global 21st century skills context and its implications for Russia, socioeconomic impacts and inequality risks, psychoeducational facets of talent upgrades, including instructional and moral & ethical areas, best experience from both formal and informal learning settings, etc.