A man of diverse academic background, IOE doctoral scholar Ivan Smirnov has pursued most of his latest research in the field of quantitative approaches to educational and social analysis. “I’m a mathematician turned biologist and then computational social scientist,” Ivan notes reflecting on the way his interest in multidisciplinary social studies has evolved. One of the key focus areas in Ivan’s scholarship is exploring social networking data to gain insights into how various aspects of thriving ICT environments affect the development of 21st century human capital.

The digital age has driven a turnaround in virtually every domain of human life, including daily communication, learning, business operations, etc. Rapid advances in IT, and particularly in the web and mobile computing technologies, have prompted an upswing in networking media that have linked millions of people in a multiplicity of ways reflecting numerous factors of background, shared needs, preferences and life experiences. By employing cutting-edge techniques for network data handling and interpretation, Ivan aims to untangle and map out complicated structures that underlie social media relationships, as well as to uncover factors driving netizens’ particular behavioral attributes and their implications for educational and broader socioeconomic contexts.

As communicating on social media has filled the lives of young people across the globe, it has also fueled major concerns among the older generation about various negative effects that youngsters’ extensive – and sometimes even obsessive – use of social media may have on their literacy and future life-courses. In his study published in the arXiv academic repository by Cornell University, Ivan Smirnov comes up with the idea of tracking developments in the complexity of networking site messages over time in an attempt to validate or dispel most of these concerns. As many people claim that the world is dumbing down because of social media but provide only anecdotal evidence, he decided to look at what is really going on, The Times’ Science Editor Tom Whipple writes in his coverage of Ivan’s paper and the reasons for pursuing this research.

I’m delighted at all the attention my study has received in the global media community. It’s always been great to be part of a highly knowledgeable and inspiring academic team here at the HSE Institute of Education, and I’d like to give a special mention to IOE experts Katerina Polivanova, Isak Froumin and Alexander Sidorkin to whom I owe a debt of profound gratitude and appreciation. But for their unfailing support, generous advice and excellent supervision, I definitely wouldn’t be a person and professional that I’m today.

Ivan begins the narrative by describing the data set he employs – a huge, more than one-billion-word corpus of messages posted on VKontakte, a popular Russian social media site, by almost a million people in St. Petersburg between 2008 and 2016. The data set also includes information on the posters’ age and secondary school affiliation.

He then analyzes this data to show how message complexity has changed over time. Assuming that, by and large, longer words should convey more complex messages, Ivan uses average word length as a proxy for message complexity – a justified choice, which, however, might be reasonably complemented in future studies by other computational linguistic metrics that, inter alia, would allow grasping semantic and syntactic facets of text complexity developments.

The results Smirnov arrives at make for very interesting reading, the study’s feature in MIT Technology Review claims recognizing that what the author is suggesting might be taking us closer – though not that far yet – to understanding what actually drives the progressing complexity of social media discourse. While much of what the analysis shows may be deemed as well-expected findings, namely a clear linkage between message complexity gains and the age and educational achievement of users, the most surprising and puzzling outcome is that – beyond the above correlation – there has been a more general and continuous increment in social media post complexity over time. The overall complexity of posts is constantly increasing, and this is no longer explainable by aging or education alone: 15-year-olds wrote more complex posts in 2016 than users of any age in 2008, Ivan comments. 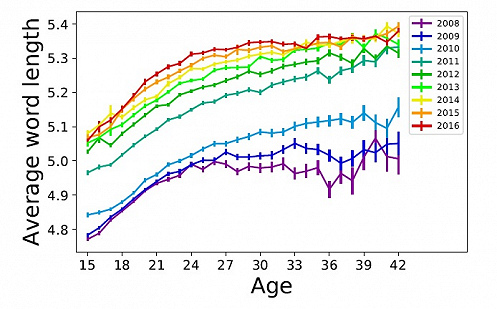 This sustained general increase in the complexity of social media posts may be partially attributable to such factors, as ongoing growth in ICT penetration and accessibility, enhancements in user interface, people getting familiar with social media environments at an earlier age and feeling ‘more comfortable’ using them in a broader range of communicative contexts, etc.

Whatever the case, there is obviously a huge room for further exploration in this field to uncover more fundamental linkages between factors of background and education, technological progress, and social media discourse evolution. At the same time, the evidence obtained so far should help alleviate fears of social media sites stunting intellectual development, as Ivan Smirnov's study suggests the reverse.