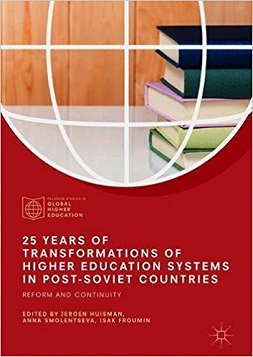 It has been over 25 years by now since the break-up of the Soviet Union. However, topics of institutional and policy change in post-Soviet higher education have so far lacked any systemic coverage by academics.

25 Years of Transformations of Higher Education Systems in Post-Soviet Countries: Reform and Continuity, a volume recently released in the Palgrave Studies in Global Higher Education book series, is set to bridge this gap. This book is a result of IOE’s first-ever study of how higher education institutional landscapes in 15 former Soviet states have been developing after the dissolution of the USSR.

According to Lucas Bischof, who was among the co-authors of the study that was carried out by the IOE University Development Lab during 2014–2016, the volume sets itself apart in a number of ways. While making profound observations about HE systems across the entire post-Soviet space, the book traces how institutional types have been evolving since the pre-Soviet era and offers a comparative analysis of the key drivers behind institutional landscape transformations.

A discussion of the 1990s and early 2000s, which were marked by HE massification and horizontal expansion, illustrates how policies almost uniformly came to rely on neoliberal mechanisms as the single Soviet governance model had ceased to exist. In considering a later period of vertical differentiation, the country cases illuminate such facets of HE transformation as: division by types and amounts of available funding; national steps to reorganize certain HEIs under the model of global research university (e.g., in Russian and Kazakhstan); the advent of transnational and international HEIs (e.g., in Armenia and Kyrgyzstan); the role of global organizations, such as the World Bank, in HE transformations; implications of the Bologna process for degree structures and QA frameworks; etc.

When considering the most recent developments in post-Soviet HE landscapes, the book notes, among others, state efforts to consolidate private HE sectors and national scenarios for further reinforcing HEI competitive stand on the international arena.