145 researchers from 30 countries discussed how higher education systems work on global and national levels, and how they are influenced by the processes of differentiation and integration.

The Consortium of Higher Education Researchers (CHER) was founded in 1988 at a conference in Germany by a group of renowned scholars who studied issues around the development of higher education systems. Since then, the annual CHER conference has become a key event for researchers in this field.

In Russia, a CHER conference has been held for the first time. According to Pedro Teixeira, Director of the Centre for Research in Higher Education Policies (CIPES) at the University of Porto, which hosts the CHER secretariat, the fact that the conference will take place at HSE is a sign that a professional community of higher education researchers is evolving in Russia. ‘Thirty years ago, CHER was a European organization, but we’ve always wanted to have an international focus, which promotes the quality of our discussions’, Mr. Teixeira added.

The topic of the recent conference was differentiation and integration in contemporary higher education. Discussions took place on almost 30 different topics. We’d like to present here the three keynote speeches which were given at the conference plenary sessions. 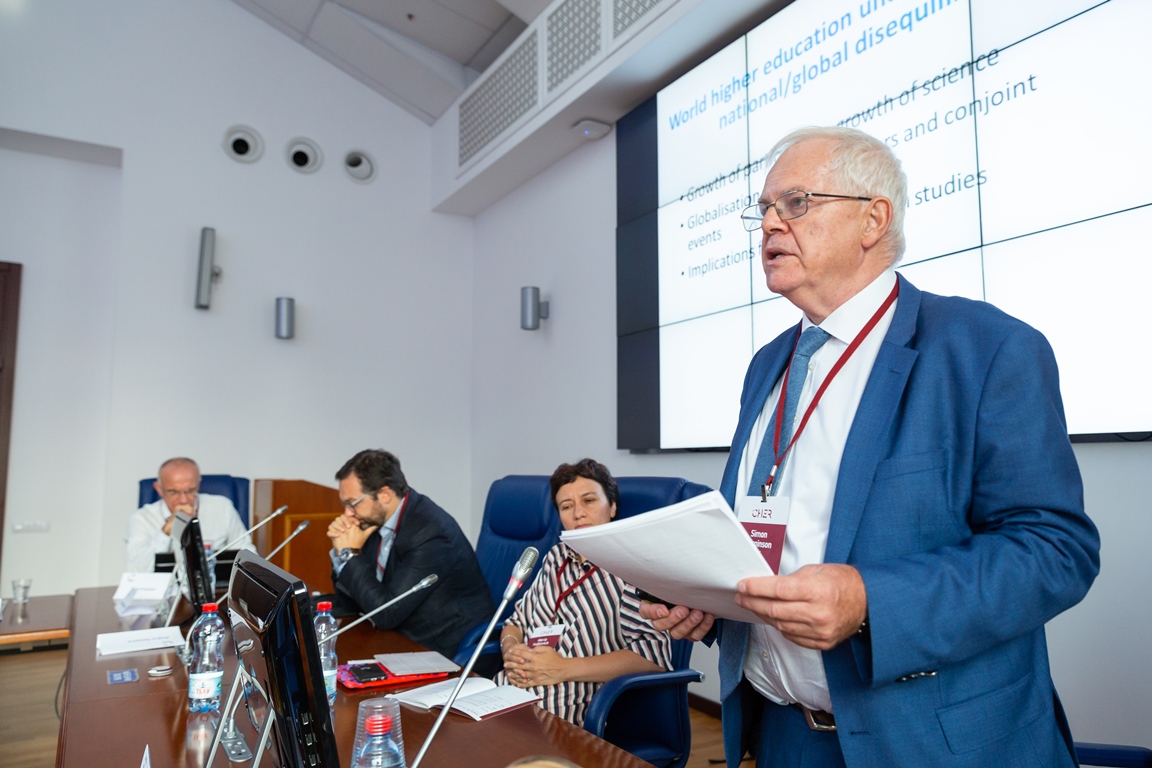 What Happens to Higher Education under Conditions of Global Disequilibria

This paper was presented by Simon Marginson, Director of the Centre for Global Higher Education at University College London. He stated that higher education globally is affected, on the one hand, by medium- and longer-term developments, such as marketization, performance management policies in public administration, the growth of national inequalities, the expanding role of research, big data, and the rise of China. On the other hand, it’s also impacted by shorter term events, such as tensions around immigration, the rise of nationalist politicians, attacks on academic freedom, and the fast-changing role of social media.

Statistics show that higher education is becoming more and more available. The number of people entering universities still varies by country and region (it remains low in Africa and South Asia). If participation continues to grow at the present rate worldwide, half of all young people in the next generation will enter degree programmes. But what will be the implications for the higher education system?

In systems where there is high participation in higher education, the large multi-purpose university is dominant as an institutional form. There are fewer specialized institutions and fewer non-university institutions. However, there can be more diversity within larger institutions. Furthermore, there is growing stratification within national systems. World-class universities are peeling away from the rest, which means that equal access to universities has become harder to achieve.

The social price of non-participation in higher education has also increased. The position in the wider community of young people who do not enroll in higher or tertiary education has worsened (there are national variations, of course. For example, this gap is smaller in Norway and Finland).

This phenomenon is self-replicating: the more people that get a university degree, the more necessary they believe it to be for the next generation, and the higher the ‘price’ that is paid by those who choose not to participate in this process

Politicians, or, more precisely, public administration systems, have their own views on universities. Many governments see research as a tool for international competition, and it is this, rather than scientific curiosity, that drives them to invest in science. But the academic world has its own dynamics, and universities are independently involved in mutually beneficial international academic cooperation, instead of trying to ‘win over’ the competitors. 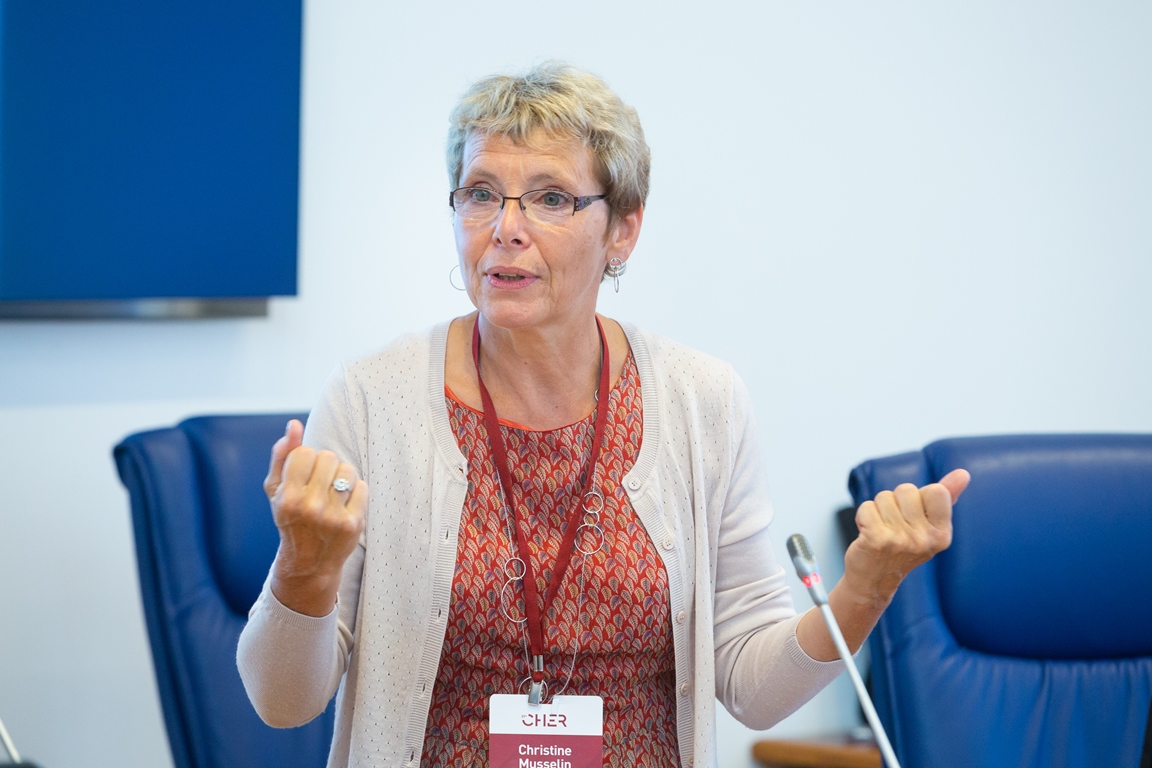 The presentation by Christine Musselin, Dean of Research at Sciences Po, was dedicated to the relationship between labour markets and universities’ organizational structures. As part of her research, she determined that universities deal with three types of labour contracts: the ‘spot market’, when a university invites an employee to carry out one short-term project (for example, to teach one specialized course); ‘repeated contracts’ (when successful cooperation is followed up by further joint projects); and tenure contracts. This means that, within one formal structure, universities have to manage different types of horizontal and vertical integrations.

More and more academic employees spend a considerable amount of time in such non-permanent positions, and have to be regularly re-instated. It’s becoming more and more difficult to change one’s status from non-permanent to tenured

This impacts the university function, increases ‘verticalization’ of universities, and influences academic freedom. The fewer tenured employees there are at a university, the fewer researchers there are who are free to choose topics and projects according to their interests. The rest of them would have to coordinate their academic interests with the university administration policies. This verticalization of universities resembles, in a way, the former ‘university chair’ system: tenured professors are able to structure research according to their own interests, and can involve non-permanent staff members who aren’t able to do their own research. However, there are differences from the traditional chairs: non-permanent staff members are less stable than according to the chair system. These individuals change universities frequently or may even leave the academic market, and the recruitment of academic staff depends less on interpersonal relations (the role of the HR department grows, while the role played by personal contact with professors decreases). 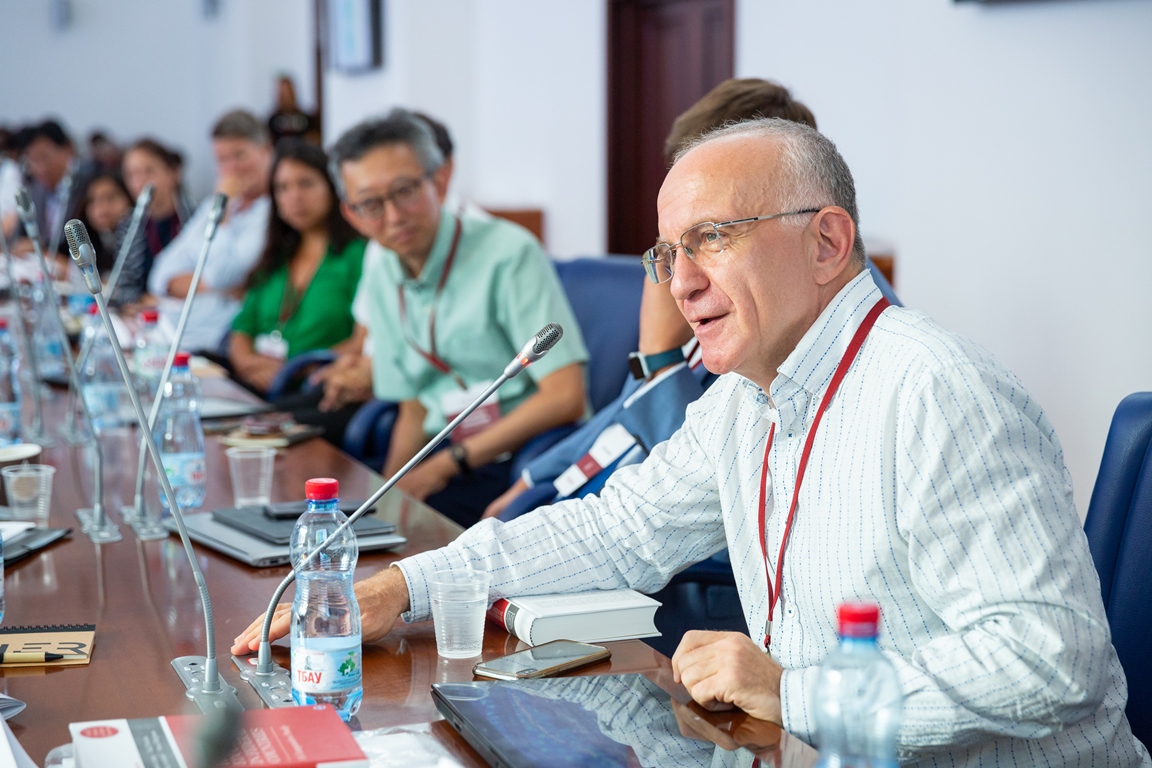 How Education in Post-Soviet Countries Has Changed

The study presented by Isak Froumin, Head of the HSE Institute of Education, reflected the results of a ‘natural experiment’ in higher education. After the fall of the Soviet Union, the Soviet model of higher education in 15 republics of the USSR was transformed in 15 different ways, according to national, demographic and regional specifics. However,  the unified Soviet approach to higher education left a common legacy. Isak Froumin and his colleagues attempted to determine the laws governing the transformation.

The Soviet model included the non-existence of private higher education institutions, free education, a centralized system of administration and planning, a narrow focus for each institution, and obligatory employment for graduates. Most researchers divide the subsequent transformation period into two stages. The 1990s were characterized by a ‘flush of educational freedom’, a sharp decrease in state control, and the inflow of new stakeholders into education (for example, households, businesses, and academic entrepreneurs). In the 2000s, the state returned to higher education, introducing a tougher management and accreditation policy. The question of higher education quality became more and more relevant due to the ever-increasing importance of national and international rankings. Funding of universities (except for very basic needs) became competitive.

The average proportion of young people (this study looks at a cohort of people aged 17–25) who received higher education during the first post-Soviet years was 14%, although this figure varied across countries. Over the 20 years that followed, many republics reported almost ‘universal’ participation in higher education.

The demand for expanding higher education came mostly from families, and governments in most countries were forced to act on it

However, this trend has four obvious exceptions: the proportion of young people with a degree has hardly changed and has remained low in Tajikistan, Azerbaijan, Turkmenistan, and Uzbekistan. Remarkably, the same four countries occupy the last four positions among post-Soviet countries in the Democracy Index, according to The Economist.

While general figures demonstrate that higher education has become more affordable, this affordability possesses inherent inequality: the probability of entering a prestigious university is four times higher for children from wealthy families than from low-income families. And the lower the family income, the lower the quality of the institution. The same can be said of institutions: universities are differentiated vertically, and, as a result, there is not only an elite segment of higher education, but also a very backward one. It is clear that social mobility and justice are not natural functions of higher education. It should be noted that the share of private higher education institutions remains low: in only three countries (Kazakhstan, Georgia, and Latvia) does the proportion of private university students exceed 20%.

With regard to other patterns of transformation of the post-Soviet higher education system, the implementation of the two-stage Bologna model was ubiquitous (it has not, however, led to drastic changes in curriculums), the number of programmes in the humanities and social sciences has grown, the state has supported engineering education, and derussification has emerged as a trend.

Isak Froumin maintains that, after gaining independency, almost all post-Soviet countries have been building national states. It is this process, rather than neo-liberal models, that has played a major role in the development of higher education in these countries.