World-renowned Authority in Cognition and Education Prof. Howard Gardner to Present at IOE

We are thrilled to announce the upcoming regular session of the IOE ‘Modern R&D in Education’ Weekly Seminar Series 2022 that will be held online next Tuesday, February 15, from 4 to 6 pm Moscow time.

In this session, Dr. Howard Gardner (Harvard University) will present a newly released volume titled The Real World of College: What Higher Education Is and What It Can Be (MIT Press) that he has co-authored with Dr. Wendy Fischman. 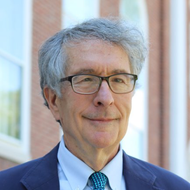 Dr. Howard Gardner is a developmental psychologist and the John H. and Elisabeth A. Hobbs Research Professor of Cognition and Education at the Harvard Graduate School of Education at Harvard University. He is Senior Director of Harvard Project Zero and has also served as Co-Director of The Good Project since 1995.

Born in Scranton, Pennsylvania, Gardner earned his BA in Social Relations at Harvard College (1965). A year later, he started a Doctorate in Developmental Psychology at Harvard where he worked closely with psychologists Roger Brown and Jerome Bruner, and philosopher Nelson Goodman. Gardner then completed a postdoc fellowship at Boston Veterans Administration Hospital, and subsequently stayed to work there for another two decades. In 1986, Gardner was appointed a Professor at the Harvard Graduate School of Education.

Howard Gardner owes his recognition and high accolades bestowed by global academia to the prolific input that he has been making across dimensions of psychology, sociology, and the science of learning. To date, he has authored hundreds of research papers and more than 30 books that have been released in over 30 languages. Gardner is arguably best known for coining the Theory of Multiple Intelligences.

In the nutshell, Gardner’s theory posits that human cognition unfolds along a variety of channels that are relatively discrete from one another. This conceptual perspective challenges what the conventional intelligence theory has proposed (i.e., the correlation among abilities, as well as traditional measures like IQ tests that typically only account for linguistic, logical, and spatial abilities). So far, eight intelligences have been identified: linguistic, logical-mathematical, musical, spatial, bodily/kinesthetic, interpersonal, intrapersonal, and naturalistic. Gardner and his fellow researches have also considered two additional intelligences: existential and pedagogical. Gardner’s idea that there is more than one dimension whereby we can define and categorize human intelligence has resonated widely with educators across the globe.

In 1967, an educational program called Project Zero got underway at the Harvard Graduate School of Education, which initially focused on arts education and has since been scaled up to span a wide variety of educational domains. Howard Gardner and David Perkins were founding Research Assistants and later Co-Directed Project Zero. Project Zero's mission is to delve into the underlying mechanisms of and to enhance learning, thinking, and creativity in the arts, humanities, and STEM education.

Jointly with William Damon, Mihaly Csikszentmihalyi, and several others, Gardner has also been spearheading research at The Good Project on the nature of good work, good play, and good collaboration. 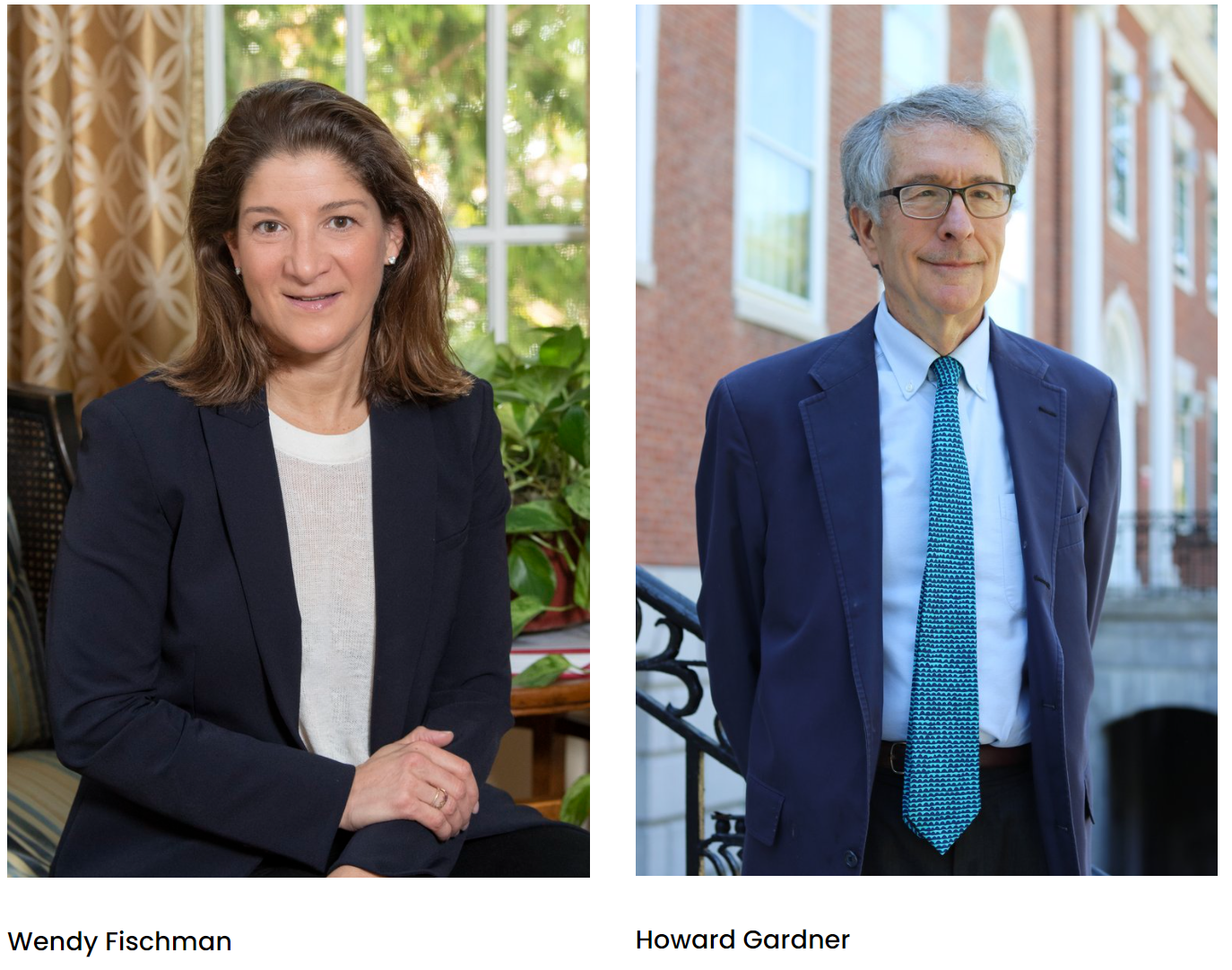 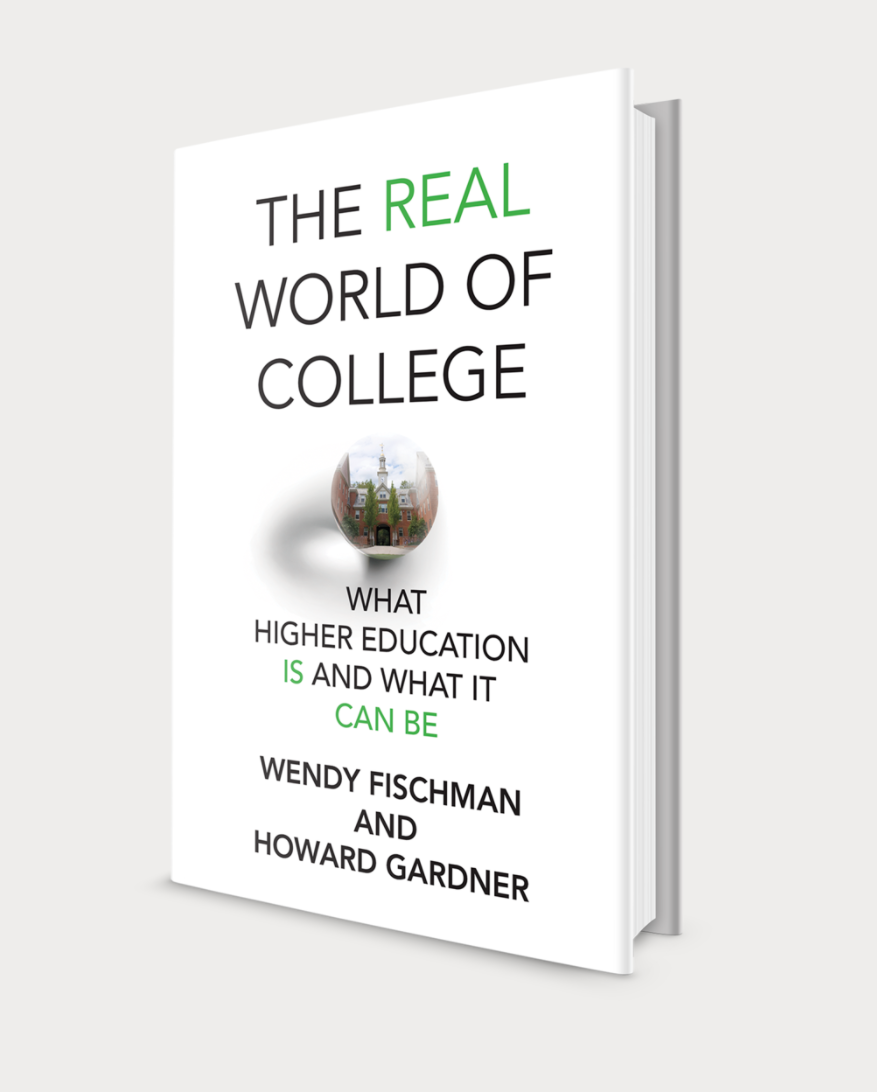 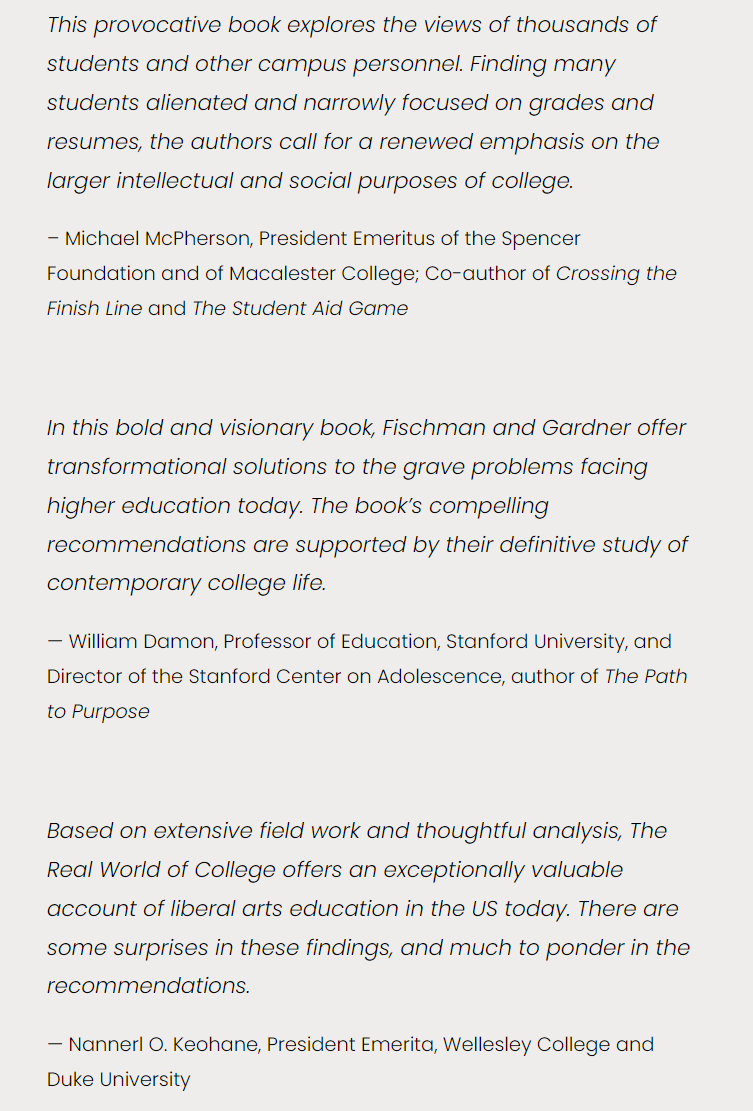 Book at a Glance

In the last decade, together with Wendy Fischman and other colleagues, Gardner has been co-directing a major study of higher education in the United States. An important output from this endeavor, The Real World of College: What Higher Education Is and What It Can Be shares firsthand accounts by students and staff of their experiences of college life and their views on U.S. academia. The authors emphasize the need for colleges to embrace more robust intellectual, ethical, and social strategies so students tap into their full potential as multifaceted creative individuals for enhanced educational and social outcomes. Anchored in evidence drawn from a vast wealth of fieldwork, the volume offers compelling recommendations on how colleges could possibly unleash their better, more socially- and intellectually-aligned versions of themselves.

Book Summary by the Authors

The Real World of College: What Higher Education Is and What It Can Be (MIT Press, In Press) describes an eight-year study of non-vocational higher education in the United States. The study is comprehensive: over five years, we conducted individual hour-long interviews with more than 2000 individuals across 10 disparate schools; our sample encompassed 500 incoming students, 500 graduating students, and small numbers of faculty, administrators, parents, young alums, trustees, and job recruiters. We listened carefully to their views on a range of issues—the purpose of college, experiences students should have both in and out of the classroom, knowledge and skills students should gain, major problems on campus—as well as the books they cherish, advice for incoming students, and what keeps them up at night.

As social scientists, using both quantitative and qualitative analyses, we present the empirical evidence—”the real world”—which goes beyond the headlines and in some cases challenges them. Then, we transition to the role of advisers, offering recommendations to individual colleges, the various constituencies, and the sector as a whole.

In The Real World of College, we introduce helpful ways to conceptualize the college experience, including:

Throughout the book, we give detailed and powerful examples of what works and what doesn’t work at specific institutions and across the whole sector. We support our firm belief that higher education needs to overcome the tendency toward ‘projectitis’—the seemingly endless effort to proliferate initiatives.

Instead, to survive and thrive, higher education must focus sharply on its unique mission—developing the mind to the fullest.  If this result is to occur, we need leaders who support and embody this mission; and equally, we need institutions that unequivocally reflect this mission —in its personnel, its programs, and its buildings. Put differently, we need a laserlike on the “why” of higher education, not just the “what” and the “how.” To effect this change, we introduce the notions of ‘onboarding’ and ‘intertwining.”  Should these aspirations be achieved,  colleges will confirm their reason for existence and ultimately serve the wider society—preparing students for good work and for an informed civic life.